By Barry Holbrook: Eddie Hearn believes there’s a chance that Tyson Fury will vacate his WBC heavyweight title rather than defend it against his mandatory Dillian Whyte.

Hearn says he’s noticed that Fury and promoter don’t speak about Whyte at all, and he feels that they could be thinking of vacating the WBC belt.

With the money Fury can make fighting the Anthony Joshua vs. Oleksandr Usyk winner, there’s very little incentive for him to face Whyte. That’s a needless hurdle.

While that should make Hearn happy because Whyte would be in a position to fight for the vacate WBC strap if he weren’t elevated to full champion, he doesn’t like that idea.

He wants Whyte to fight Fury, as he feels it would be a colossal mega-fight in the UK. Whyte must fight Fury.

If Whyte is elevated to WBC champion outside of the ring, he’ll be viewed as an email champion, and he’ll never be respected.

Fury and his promoters at Top Rank haven’t said that they plan on vacating the WBC title, but it looks like they’re heading in that direction.

Bob Arum said that Fury would be fighting on March 26th means that he’s likely to be doing so without the WBC title.

Hearn points out champions are supposed to defend against their mandatory challengers, and he doesn’t understand why Fury isn’t doing that.

“As far as I’m aware, I don’t believe that’s possible in the current legal situation with Dillian Whyte’s case,” said Eddie Hearn to iFL TV on Tyson Fury fighting without his WBC title on March 26th.

“I don’t know. Tyson Fury can do whatever he wants. If he wants to vacate the belt, I guess he can fight on March 26th. I don’t know why he’d want to vacate his belt.

“The value is always of owning the belts and becoming undisputed,” said Hearn.

“I don’t know why the Whyte fight is taking so long to make because it’s such a natural fight and such a great fight for British boxing. It’s massive,” said Hearn.

The WBC will be the one that decides whether Fury can fight on March 26th without defending his title with their organization. Given that the WBC ordered him to fight Fury, they may insist that he do that.

Team Fury not talking about Whyte

“It’s the one fight that no one talks about from their side. Fury doesn’t really talk about the Dillian Whyte fight. Frank and Bob briefly talked about it. Bob brushed it aside, ‘He [Whyte] wanted too much money.’

“He [Joshua] didn’t just vacate the belt. ‘Usyk is too difficult to negotiate with. We’re not fighting him. We’ll fight someone else.’ You’re supposed to take care of your mandatorys as a champion,” Hearn said.

It’s not a good sign that Team Fury isn’t mentioning Whyte’s name because that indicates that they may be thinking of vacating the WBC title.

Taking the fight with Whyte would be risky, and it appears that Team Fury would rather avoid it because there’s too much money he would lose out on if he were to get beaten.

When you can make countless millions, you don’t take any chances. The Joshua-Usyk 2 winner would prefer that he have the WBC title, but that won’t stop them from fighting him next.

Whyte has a Plan-B if no Fury fight

“I just feel like it’s a great fight. Tyson Fury will believe that he can beat Dillian Whyte, but it’s a really good fight.

“I think in terms of the value of the fight and what we feel is fair, I think that’s dollars, pounds, whatever you want,”  said Hearn when asked if it’s true what Bob Arum said of Whyte wanting $10 million to fight Fury. 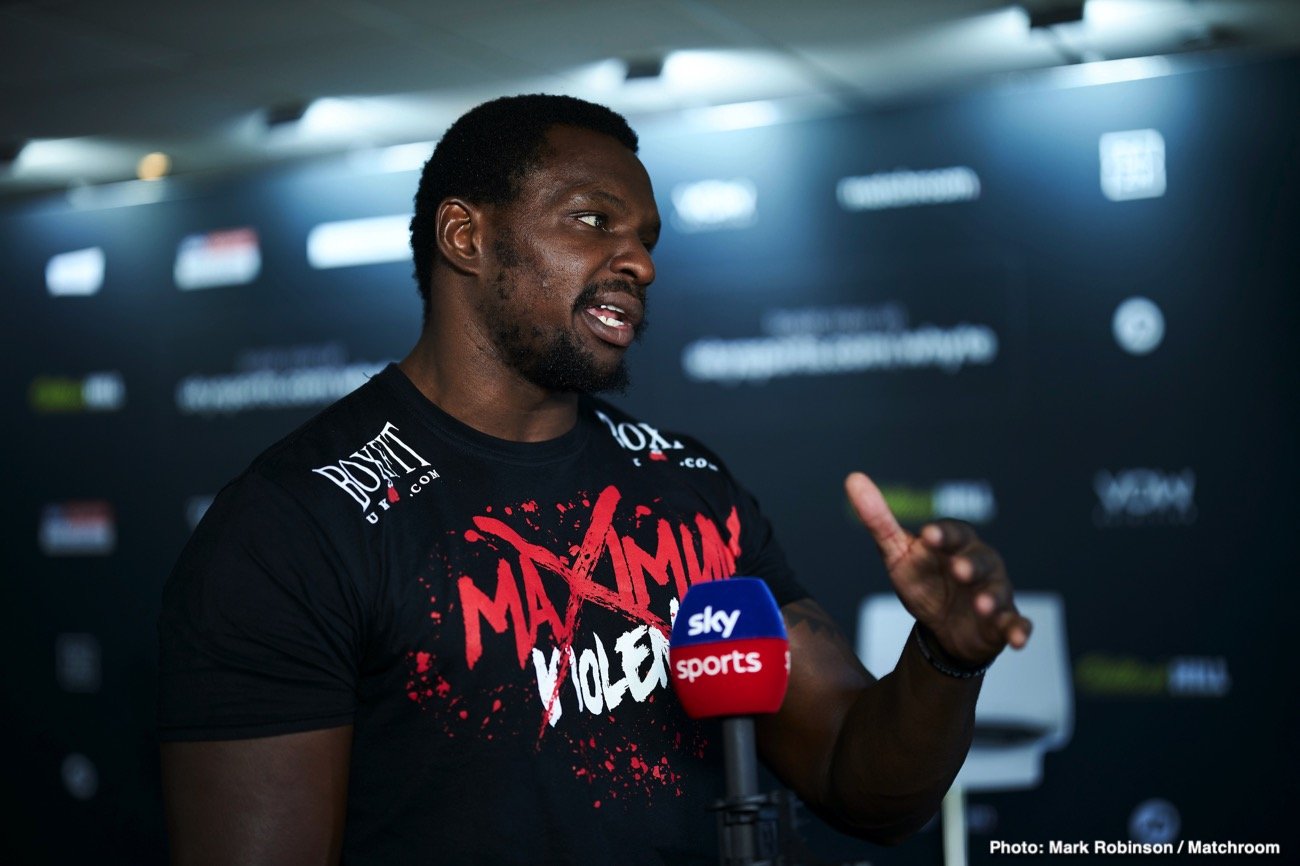 Whyte’s Plan-B will depend on the World Boxing Council if Fury vacates his WBC title. If Fury gives it up, the WBC will undoubtfully order Whyte to face the highest-ranked contender in their rankings for the vacant title.

Whyte would face one of these contenders: