Despite patches of turbulence, few can now argue that Arteta hasn’t put Arsenal on the right track. The Spaniard has been praised for his handling of the Pierre-Emerick Aubameyang debacle that saw the striker stripped of the club’s captaincy.

In his absence imposed by Arteta, Arsenal have flourished and are now genuine contenders in the top four race.

However, looming on the horizon is great upheaval in his forwards department.

Folarin Balogun is expected to join Middlesbrough on loan, while Eddie Nketiah is a target for Crystal Palace. Both he and Alexandre Lacazette have entered the last six months of their contracts at the Emirates.

Arteta has also refused to rule out an exit for Aubameyang who could be sold as early as this month despite being on AFCON duty.

Arrivals could therefore go from being a luxury to a must, and Sky Sports provided the latest on both Dusan Vlahovic and Jonathan David.

Fiorentina’s Vlahovic is one of Europe’s most in-demand strikers and has attracted Tottenham’s eye as well as Arsenal’s. Per the Athletic’s David Ornstein, Arsenal believe they are best placed to land the lethal Serbian.

Speaking to Sky Sports News, transfer guru Kaveh Solhekol acknowledged Arsenal are in the mix. However, despite recently adding Jonathan Ikone and Krzysztof Piątek to their ranks, Fiorentina aren’t expected to sell Vlahovic until the summer.

Vlahovic exit likelier in the summer

“As far as [Sky Italy journalist Gianluca] Di Marzio is concerned, it is more likely Vlahovic will move in the summer rather than moving this month,” said Solhekol.

“Although, what is interesting is Fiorentina have been doing quite a lot of business in the past few days. For instance, today they have taken the Poland striker Krzysztof Piątek on loan from Hertha Berlin, and a lot of people are thinking is that them preparing the ground for maybe letting Vlahovic leave.

“They have also signed Jonathan Ikone, the French winger from Lille, a couple of days ago for 15m euros. Again, people are asking if they are spending money because they know they will be getting a lot of money in for Vlahovic.

“But as I said, according to Di Marzio, it is more likely he will move in the summer because then he will have just a year left on his contract and he’d be in a strong position to pick from one of all these clubs who are after him.

“From Fiorentina’s point of view, they want him to stay  and are desperate for him to sign a new contract, but everything they have put in front of him and his representatives, he has turned down. So, it looks like he will be moving, maybe this month or the summer, but more likely the summer.” 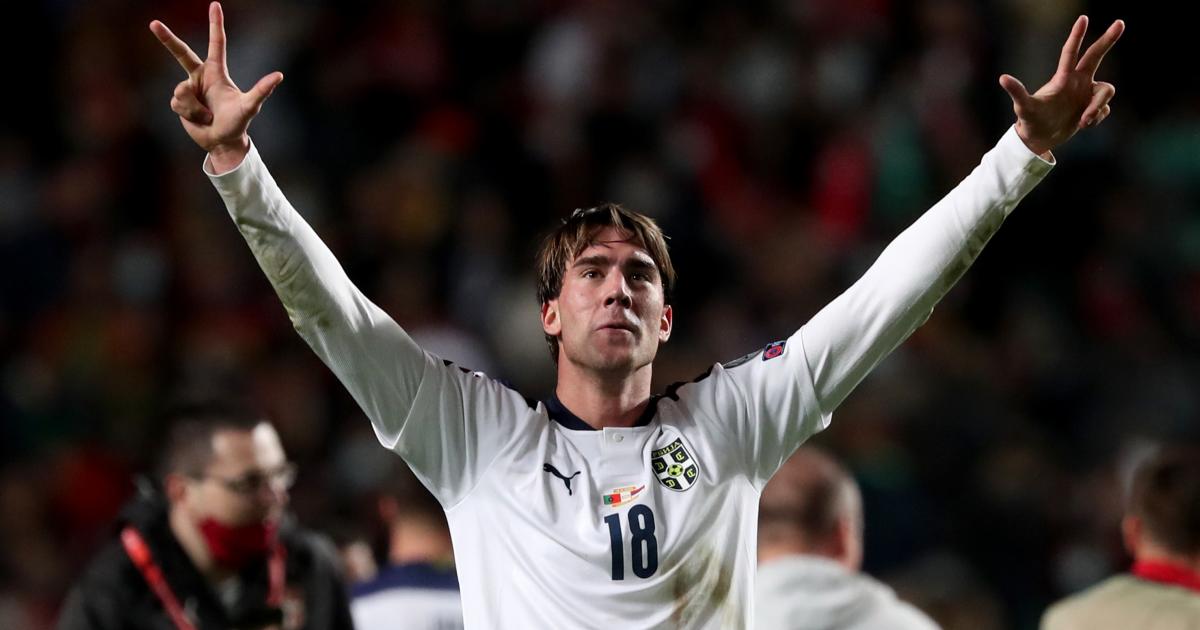 Regarding Lille’s Jonathan David – another Arsenal target – Sky’s Dharmesh Sheth added: “One name that has been mentioned to me is the Lille striker Jonathan David. Arsenal are keeping an eye on his situation.

“It’s more likely that any business with David to Arsenal, or any other club because he is quite sought after, would be done in the summer. That’s because Lille are still in the Champions league and fighting to finish in a Champions League position in Ligue 1 for next season.

“But Arsenal potentially could be busy [in January] as far as incomings are concerned.”

Regarding the strikers currently on Arsenal’s books, Sheth said: “Given Eddie Nketiah’s situation, given the fact Folarin Balogun will be going on loan to Middlesbrough until the end of the season, and also given the cloud that is hanging over the club just now regarding their former captain Pierre-Emerick Aubameyang, Mikel Arteta was asked today if Arsenal will be going into the market.

“Arteta has not ruled that out. So potentially, Arsenal could go into the market to bring someone in, in a forward position.

“Also, the man they made captain in Aubameyang’s absence, Alexandre Lacazette, and his contract is up in the summer.

“So, lots of things up in the air at the moment for Arsenal.”