Aston Villa have reportedly joined the race to sign experienced Arsenal striker Alexandre Lacazette on a free transfer this summer.

The France international is out of contract at the end of the season, with several clubs known to be chasing his signature. However, it appears that Steven Gerrard’s Villa have added their name to the list of potential suitors.

Indeed, Turkish outlet Sporx claims Villa have joined Lyon and Besiktas in the race to snap up the 30-year-old.

Lacazette has scored a woeful three times in 16 appearances in the Premier League this season. Overall, he boasts a record of 44 in 153 games for the Gunners since his switch from Lyon in 2017. His career total, however, stands at an impressive 199 in 467 games.

Sporx reports that Lacazette wants a salary of £5million per season, a figure which Besiktas are baulking at.

As for Lyon, much depends on what happens with Moussa Dembele’s future. There is also the potential return of Tanguy Ndombele on a permanent deal if his loan goes well.

The Tottenham man will not come cheap though, and the sort of salary he could demand could scupper a return for Lacazette.

As for Villa, Gerrard is expected to be in the market for attacking options this summer.

Former Liverpool striker Luis Suarez has been mentioned as one option. That is perhaps not that surprising given the links between the pair from their time at Anfield.

The 34-year-old will also be out of contract this summer and could join Gerrard and Philippe Coutinho at Villa Park.

Lacazette’s Arsenal teammate Eddie Nketiah has also been mentioned as an option. However, the England Under-21 is far less proven than the other two names mentioned and would be more of a gamble.

Meanwhile, a report claims Everton will battle Aston Villa plus clubs from Spain for Ajax defender Noussair Mazraoui in the summer transfer window.

The 24-year-old’s name was prevalent in the media approaching the January transfer window. The likes of Arsenal and Leeds United were heavily linked with the Morocco international. And late last month, the Netherlands-born ace fuelled speculation about a summer exit from Amsterdam.

When asked about his plans for next season, he said: “That’s a good question. I think the chances of me remaining at Ajax are very small, maybe 5 per cent.

“I am open for something new, I have played here for 16 years and I think it’s a good moment to leave.”

Having come up through the Ajax youth system, Mazraoui made his first-team debut in the 2017-2018 campaign. He has now enjoyed 125 appearances for the Dutch giants, scoring 10 goals. 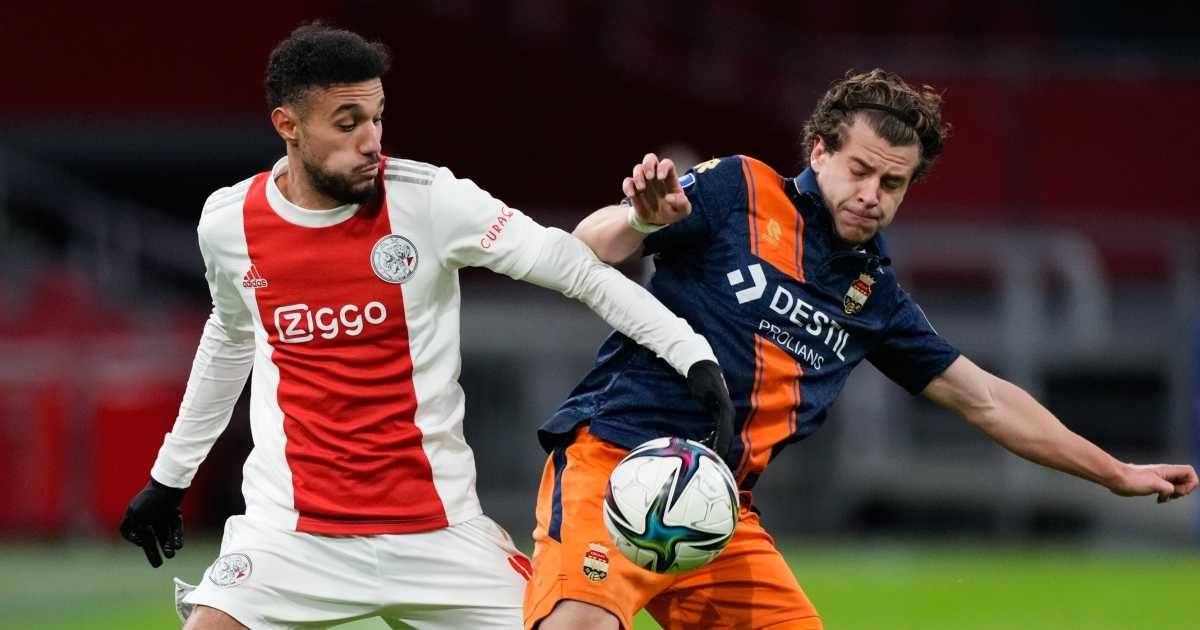 Morocco came calling in 2018 and the full-back has now earned 12 caps for the Atlas Lions. However, his last international appearance was back in 2020 and he missed out on this year’s Africa Cup of Nations.

But his stock remains high and a report by Fichajes suggests the Toffees are now keen. The African will be out of contract in the summer.

And that means he can start negotiations with clubs about joining for free at the end of the season.

New Goodison chief Frank Lampard will look to put his mark on the club during the next window. Mazraoui has been linked but there are plenty of other suitors waiting in the wings.

Mazraoui with much to ponder

Steven Gerrard’s pulling power has already seen the likes of Philippe Coutinho arrive at Villa Park. And he may well be set to spar with his old England colleague for Mazraoui’s signature.

However, the report adds that LaLiga giants Barcelona have also got their eyes on the right-back.

Barca’s financial woes have been well documented. And, with that in mind, it is easy to see whey they would opt to land a free agent to bolster their ranks.

Any club that does manage to get him on board will gain a versatile player. Although a right-back by trade, he is comfortable in attack or defence, with an ability to deliver pinpoint crosses.

His next destination is unknown but Ajax director Edwin Van der Sar is resigned to the star leaving.

“We’ve lost months in negotiations,” he said of the player last year. “We’d like to keep [Mazraoui] but now it’s the middle of December so you know where it’s going.”